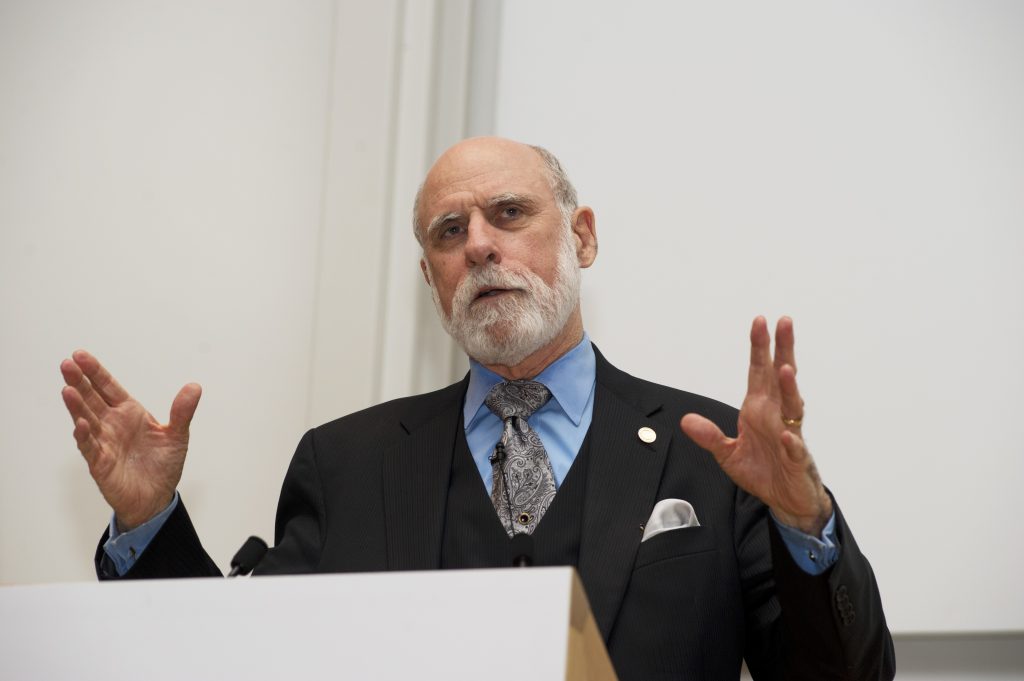 Vint Cerf speaking at the 2011 OII Internet Awards. He was awarded for his extraordinary contributions to the design and management of fundamental Internet architecture.

Vint Cerf said: “I have long been an enthusiastic supporter of the Oxford Internet Institute. It is a signal honour to be recognized by OII and I am deeply grateful. It should be recognized that the success of the Internet is due in large measure to the extraordinary people who have promoted its development and spread.”

Widely known as one of the ‘Fathers of the Internet,’ Cerf co-designed the TCP/IP protocols that underpin the Internet’s architecture during his tenure with the US Department of Defense’s Advanced Research Projects Agency (DARPA). Since then, Cerf has played a central role in many of the Internet’s major institutional developments, serving as founding President of the Internet Society from 1992 to 1995 and as a Chairman of the Internet Corporation for Assigned Names and Numbers (ICANN) from 2000 to 2007. He created the Internet Configuration Control Board in 1979 that became the Internet Activities Board and later the Internet Architecture Board; serving on the IAB from 1983-1993. In addition, Cerf is honorary chairman of the IPv6 Forum, dedicated to raising awareness and speeding introduction of the new Internet protocol.

OII Director, Professor William Dutton, said: “The Lifetime awards are intended to honour individuals who have played a uniquely significant and long-lasting role in shaping the Internet. Vint Cerf has been a remarkable advocate of the Internet, notable not only for co-designing one of its fundamental protocols, but for his leadership in some of the most significant Internet governance institutions.”

In December 1997, President Clinton presented the US National Medal of Technology to Cerf and his colleague, Robert E. Kahn, for founding and developing the Internet. They received the ACM Alan M. Turing award in 2004 for their work on the Internet protocols.

Cerf currently serves as vice president and chief Internet evangelist for Google. In this role, he is responsible for identifying new enabling technologies to support the development of advanced, Internet-based products and services from Google. He is also an active public face for Google in the Internet world.