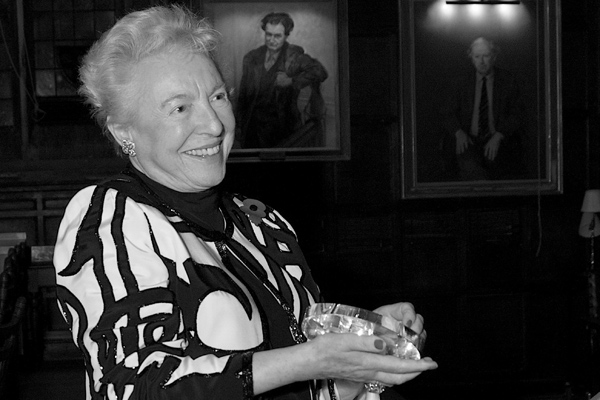 The award reflects her contributions first as a technology entrepreneur supporting the employment of women with dependents and later in her extensive philanthropic endeavours.

Dame Stephanie said “I’ve always been committed to social, economic, legal and ethical issues. And am enormously proud to have been able to facilitate the OII as a centre of excellence. The thing which swung the decision for me was the address: 1 St Giles. (Giles was my late son).”

The OII’s Director, Professor Helen Margetts, said “Through her vision, commitment and generosity, Dame Stephanie Shirley has made so much difference to so many people’s lives, and whilst we are clearly so grateful to her for her role in establishing the OII, we are just one of many successes she has built over the course of her impressive career.”

A highly successful entrepreneur turned ardent philanthropist; her charitable Shirley Foundation is now one of the top grant-giving foundations in the UK [£67m given to date] Having arrived in Britain as an unaccompanied child refugee in 1939, she started what became Xansa plc on her dining room table with £6 in 1962. In 25 years as its Chief Executive she developed it into a leading business technology group, pioneering new work practices and changing the position of professional women (especially in hi-tech) along the way. In the early days of the company, concerned with creating work opportunities for women with dependents, she employed mainly women as computer programmers, She also adopted the name “Steve” to help her get ahead in the male-dominated business world.

A strong believer in business people giving back to society, she established the Shirley Foundation in 1986 with the primary aim of supporting pioneering projects in the field of autism spectrum disorders with particular emphasis on medical research. The Foundation also provided support for technology-related projects and it was her visionary support which enabled the founding of the Oxford Internet Institute at the University of Oxford in 2001 with a major donation of over £10m. In 2009/10 Dame Stephanie served as the UK’s Ambassador for Philanthropy, a government appointment aimed at giving philanthropists a “voice”.

Dame Stephanie Shirley was awarded an honorary doctorate from the University of Buckingham in 1991, since when she has been so honoured by 23 English and four Scottish universities. In January 2014 the Science Council named Dame Stephanie as one of the Top 100 scientists in the UK. She was appointed Dame Commander (DBE) in the New Year Honours, 2000 for her services to information technology.