Internet and Society Award
Winner
2011
The innovative online action group, 38 Degrees received a "Best UK Internet NGO" award from the Oxford Internet Institute, in recognition of its exemplary efforts in using the Internet for the public good in Britain. 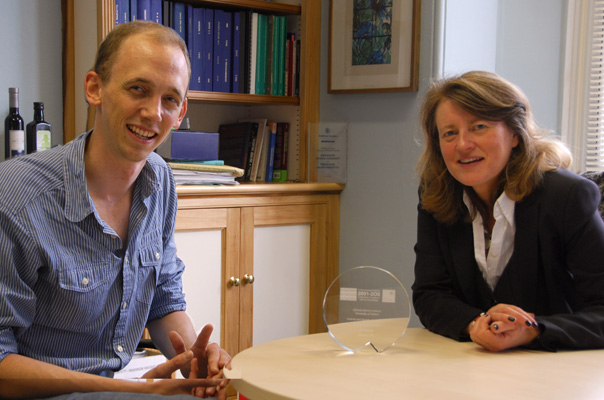 Established in 2009, this membership organisation has used the Internet to achieve significant policy impact in the past year, with influential campaigns helping to convince government not to sell off UK forests, and to postpone the replacement of the Trident nuclear defence system.

Named after the critical angle at which an avalanche is triggered, 38 degrees capitalises on the Internet’s potential to make political action visible to overcome traditional collective action problems. The website’s ease of use and the organisation’s determination to let its members set the political agenda make this an extremely interesting new tool for political engagement.

David Babbs, Executive Director of 38 Degrees said: “38 Degrees is very happy to receive this award. We’re proud of the work we’ve done so far to bring hundreds of thousands of people together and help them to be heard in the political process – it’s great to have that work recognized by a prestigious Oxford institute.”

OII Director, Professor William Dutton, said: “These publicly nominated awards are intended to recognize individuals and bodies who have made innovative use of the Internet for the public good in the UK. 38 Degrees is an excellent example of the way in which Internet technologies can empower individuals to take effective action and to support collaboration with their peers.”

Inspired by the US group MoveOn, and the global group Avaaz, founders of 38 degrees include Gordon Roddick, co-founder of the Body Shop and Henry Tinsley, previously a Chairman of Green & Black’s chocolate. The organization currently has over 750,000 members in the UK and works with both traditional and new media to maximize the impact of its campaigns.

The award was presented on 22 September 2011 in Oxford, at a Gala Dinner celebrating the tenth anniversary of the founding of the Oxford Internet Institute. The OII Awards are purely honorary and do not involve any financial reward.